From Beantown to Better:

Sometimes coming home isn’t a homecoming. That’s what Darrell, 65, found when he returned to Norfolk after living in Boston for three decades.

Growing up, “my family was in chaos!” he says. His mother died when he was just three. His father, though loving, “was a full-fledged alcoholic,” so Darrell, his older brother, and his two younger sisters lived with extended family for months at a time. “We had to put up with a lot of madness.”

Though he grew up in church and tried to stay out of trouble, Darrell “had to figure life out myself. I had to experience a lot of negative things from people, and I didn’t have no one to talk to when things went bad.”

Looking for stability after graduating from high school, Darrell enlisted in the Army. He served as a supply clerk for his 2 ½-year stint, then was honorably discharged. “It was not something that I wanted to do all my life.”

But Darrell did find a lifelong passion: dancing. Working in a factory by day, he also worked as a semi-professional dancer in Hampton Roads. A lead dancer, trained in ballet, modern, tap, and jazz, he performed in Broadway musicals and a dance trio. “It was one of the best experiences that I ever had!”

At age 33, he moved to Boston to teach dance at a theater. But when he went for the interview, they wanted him to pay them to study there.

Still, he had distant family in Boston, which soon became home. Darrell graduated from the culinary arts program at Boston University, and spent his career in food service and restaurant management.

He also met his “wonderful” wife. Over the next 28 years, they raised her two girls and their daughter together. Their family was close-knit, churchgoing, and full of love.

But after five years together, Darrell discovered that “my wife had an undercover cocaine addiction. When one of their girls found razor blades behind a chair, Darrell knew he needed to protect his daughters. He and his wife agreed that “she wasn’t strong enough to take care of those children,” and the court awarded him full custody of two of their three girls. He didn’t want any child support. “I just want my wife to do what she needs to do to get better and get her life in order.”

Sadly, she couldn’t. Despite his wife’s repeated attempts to get clean on her own, “I just couldn’t stomach it anymore. I’ve been trying to get her help to overcome that for years.” Last fall, Darrell made one of the most difficult decisions of his life. “I told my wife, ‘Baby, you’ve been doing these drugs for many, many years, and I cannot deal with it anymore. I’m going to have to separate myself from you.’”

By November 2020, Darrell told her he was moving back to Norfolk. “That’s my home. And that will give you some space to decide how you are going to live your life.” His wife supported his choice. Despite their differences, “we still have a great relationship,” Darrell says. “We’re just not living in the same household.”

In Norfolk, Darrell planned to stay with his youngest sister for a while. That did not work out well. Hurt and embarrassed, with “nowhere else to go,” Darrell lived in his car for three months. “I prayed so hard!” and one Sunday at his brother’s church, the pastor suggested that he try The Union Mission. Darrell knew nothing about the ministry, and “I thank God so much for that minister who recommended that I come!” 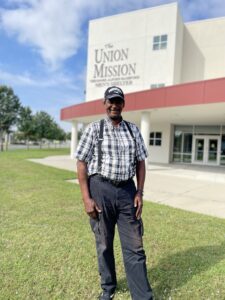 Darrell has been at the Mission for five months now. He’s grateful for a safe place to stay, free meals, daily showers, and real help. Through the Mission’s Wellness Program, a doctor has adjusted his blood pressure meds. “I’m doing everything I can to keep my health strong.” And he’s benefitted from the mental health resources. Despite his early-childhood traumas, “the only time I had anxiety was when I was living in my car,” but the classes and support groups here “have been great!”

Darrell loves that his case manager is so supportive and spiritually wise. “It feels so good that someone listens to me and wants to help me.” Together they are working to plan the steps to his future, and Darrell is taking good advantage of the practical resources that the Mission offers.

The spiritual support is just as important. “The Lord has always been a part of my life,” Darrell says. “I know that if I keep going the way I’m going now and I’m following God’s lead, I know I will get myself together.”

His family disliked that he is living in a homeless shelter, but he reminds them, “This is just a phase of life. I’m just going through the process to get myself together.”

“I truly, truly want to get an apartment,” and he and his case manager are “on top of it.” His veteran’s benefits will help with permanent housing as well. “By being here, I’m very optimistic about things getting better for me. I really am.”

His daughters still want their dad to return to Boston, but Darrell wants to stay near Virginia Beach so that his family will always have a fun place to visit him in the summer. Back in August, they came to vacation for a week and his grandson’s hug for his G-paw “brought a tear to my eye!”

Darrell began collecting his Social Security benefits before he left Boston, and he hopes to work part-time in food service once he’s better established here. And he hopes his wife will do better, too.

His past experience has helped him see the possibility of a brighter future. “I didn’t always get it right, but I don’t have no regrets about the choices I did make, because I’m still here, and as long as I’m here, there’s room for growth.”

“Don’t always feel like you have to have it all together. You are never too old to learn. I know that God has a plan for everyone who’s still living!”

Football was his future, or so Carlton thought. But in life, as in the game, “you get knocked down. To be able to get back up is something that motivates me.” Born and raised in East Hartford, Connecticut, known for its gunplay, drugs, and gangs, Carlton grew up in a Christian home. But his real …
Read More

Few people expect to meet a hero living at a homeless shelter. But they should meet Kody. He’s is a security guard at downtown Norfolk’s premiere shopping center. He’s worked there for nine months now, “seeing that everyone is safe inside the mall” and “making sure things don’t happen.” But one busy day last summer, …
Read More

Paul may look familiar if you’re a Union Mission Anchor of Hope. His smiling face appears on our monthly giving donation page, but he hasn’t always looked so happy. His 67 years have had their twists and turns, but now Paul is back on the straight and narrow. Born near Boston, Paul grew up in …
Read More